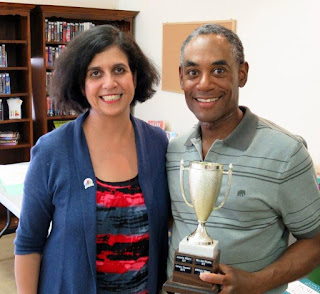 Criteria:
This award is at the discretion of the President.

Marvin is a dedicated member who is always willing to go the extra mile to help, very supportive, and has a fantastic wealth of ideas and advice

Achievements:
Congratulations Marvin on being nominated for this award!

Posted by Unknown at 7:51 PM No comments: 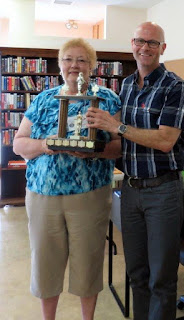 Criteria:
Awarded to a member whose achievements, leadership and enthusiasm represents the spirit of Igniters club as defined in its mission statement


The winner of the Spirit of Success Leadership and Communication is Marion!
Posted by Unknown at 7:45 PM No comments: 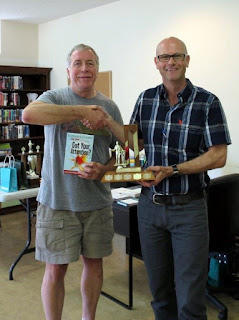 Criteria:
Awarded to a member whose outstanding presentation and speaking achievements are an inspiration to Igniters members to continually improve and hone their skills.

The winner of the Spirit of Success Speech Achievement is Stephen! Congratulations Stephen on all your achievements in 2015!
Posted by Unknown at 7:43 PM No comments:

Drum roll please! The winner of 2015 Toastmaster of the Year award for Igniters is Glen! 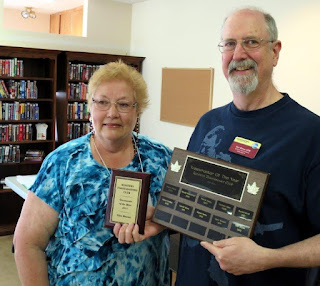 Toastmaster of the Year: to recognize a member within the club for their achievements, enthusiasm, dedication, helping others, and success within the club and community.

Glen is a very inspiring member at Igniters Toastmasters. He has shown an experienced Toastmaster at any time can decide to pursue goals and encourage others along the way. Glen is a dedicated mentor, leader, and role model at Igniters and in the Toastmasters community.

Educational Goals
Early in the summer, Glen sent a note to the VP of Education Daryl to share his upcoming plans and goals to receive his DTM for the Fall Conference. He then signed up roles on the advanced agenda for the next few months. This was not only helpful it encouraged some members to sign up beyond the weekly goals. Daryl was very inspired and planned his own educational goals. I too was inspired and used Glen as an example for other members to sign up for roles and how planning and determination could help you achieve your dreams. Glen mentors a few new members at the club and shares his experiences and feedback.

Glen achieved four educational achievements this year and earned a triple crown! He achieved his CC in July, Advanced Silver in August, Advanced Communicator Gold in September and also his DTM. Mission accomplished! One of the highlights is Glen received his DTM from the President of Toastmasters at the Fall Conference.

Special Events
Glen helped at the Igniters 10th Anniversary by being a friendly Table Topics Master, contributing to the silent auction, and assisting with the set up and cleanup of the event. He has helped to support members by judging at Club and Area contests and giving useful advice.

Conducted Education/Training session Area event:
In September, Glen presented “Building Your Thinking Power, Part 1: Mental Flexibility” module. The event was attended by members from other clubs from at least two other areas as well as Igniters. This was also a fundraising event for Igniters.

Helping Other Clubs
Glen Brown assisted his wife Club Coach Diane Fox to help To the Point. He was the VP of Education and helped members plan and achieve their goals. By the end of the year the club had successfully reached 22 members.

Glen, DTM deserves to be Toastmaster of the Year for all his achievements and contributions to the club and the Toastmaster community.
Posted by Unknown at 7:39 PM No comments:

The 2015 Making a Difference Award for Igniters. 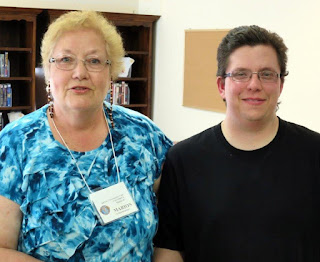 This is an individual award given to one member in a club who has made a difference in their club.
The nomination of each club member will be displayed on the District 42 website.

On behalf of the executive, we would like to nominate Chris C. for his ongoing dedication and support for many years in his duties as Sergeant at Arms at Igniters Toastmasters. He is usually the first person to arrive to unlock the door, set up tables and chairs, distribute evaluation forms and creates a well-organized room for welcoming guests and members. This contributes to a strong first impression for guests. Chris is always on top of greeting guests, being friendly and making sure they have a name tag. He is very dependable and no matter what the weather Chris is at the meeting! He never complains and just does it even if he isn't feeling well.

At any open house, special event, or meeting Chris is always willing to arrive early and help with set up and clean up. This is very helpful as it allows other members to connect with the guests, spend more time talking with newer members, and allows the executive to meet and discuss issues. Chris is always willing to step up and fill in any roles and if necessary even take on two! We really appreciate Chris for all his dedication and help at Igniters Toastmasters and he deserves the Making a Difference Award.

Congratulations Chris on Making a Difference in 2015!
Posted by Unknown at 7:36 PM No comments:

Public Relations of the Year award for Igniters 2015. 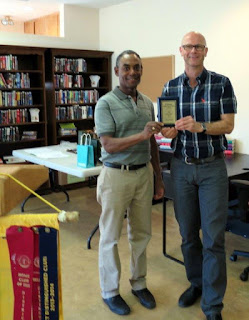 Criteria:  Recognizing a member for promoting and marketing of the club. The winner will go on to compete at the Area level.

Chris G. is a dedicated member who is organized, dependable, and has done an excellent job in promoting Igniters Toastmasters.

The winner of the PR of the Year is Chris G.! Congratulations on your success in 2015 Chris!
Posted by Unknown at 7:32 PM No comments:

Winner of Igniters Rookie of the Year 2015! 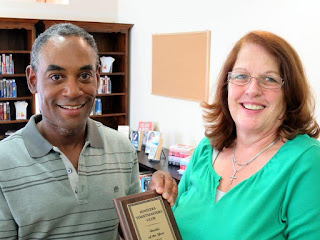 Rookie of the Year Award

Presented to a member who has been with Toastmasters for less than 18 months to honor their achievements and success. The recipient will move on to compete at the Area Level.

Bren is a dynamic member who is supportive, enthusiastic, and has brought a real energy to the club.

Achievements
The winner of the Rookie of the Year is Bren! Congratulations Bren on your hard work and success in 2015!

Posted by Unknown at 7:29 PM No comments:

Spirit of Success -- Igniting Spirits for 2015 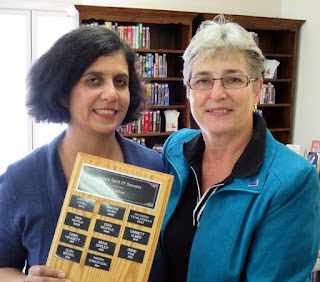 Nandini has been the spark plug to get our club roaring this year. Motivational and encouraging during meetings as well as outside the club. I feel the executive has been extremely effective this year under her guidance as President.

Specifically - the agenda creation/distribution had issues that Nandini was able to resolve in a quiet but effective manner.
-- Glen

Nandini did a lot of work for all of us in the background -- covered a lot of roles (VP Ed etc.) that there was no one to cover for and still managed to be really involved in all manner of other Toastmaster events. Nandini did well in the club, area and district contests as well.
-- Chris

Thanks for all the support and encouragement given by Nandini. She truly make Igniters a welcoming place.
-- Margaret

I will vote for Nandini for the Spirit of Success of the Club because I like her presentation and the spirit to say "never too old to try new things".
-- Julie

Nandini led Igniters to President Distinguished with 10/10 goals. She inspired her team to succeed to perform at a higher level in their roles. She led by example and a role model to us all. Nandini is a dedicated leader and demonstrated fantastic leadership skills.

Congratulations Nandini on your award!

Posted by Unknown at 7:20 PM No comments:

Three speakers including a guest speaker this week. 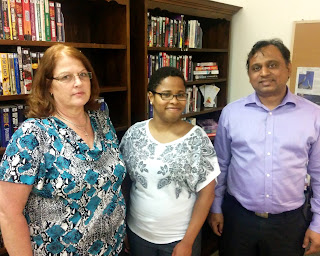 Igniters enjoyed a very full meeting this week. Our Toastmaster Mona brought in a list of different animals and their personality traits. We each were asked to choose an item from the list that we felt we could identify with. The animals were also used to explain different portions of the meetings, and were even easy to refer to during the meeting. Very original approach for Mona.

We then headed into the speeches. Ayana warned us about possible web based scams and how to spot and avoid them. Bren entertained us with a speech about a vacation that started out well but took a turn for the worse. Bren was able to find a silver lining in her misfortune which we will all remember. Next we had a guest from another club Samarjit share his experiences with retail show rooming and the effects it may have on our lives and the lives of several of the businesses we like to shop at.

To top it all all we were lucky enough to have more guests join us this week. It must be our energy that is bringing them in in such numbers lately.

If you were not able to attend this week, you really missed out. We hope that you will be able to join us this Tuesday!

Posted by Unknown at 8:00 PM No comments: 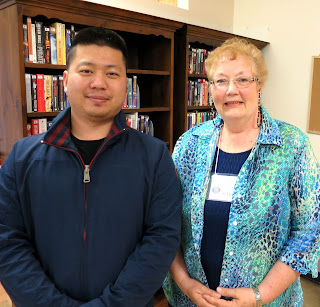 Our Vice President of Membership Marion, completed an induction ceremony on Tuesday for our newest member Edward.

Edward brings with him a lot of interesting experience having lived and completed schooling in China, and applying for work and having children in Canada.

We are very happy to have Edward join our club and hope that he will find the resources he needs in Igniters to reach all of his goals!

Welcome Edward.
Posted by Unknown at 8:00 PM No comments: