My trip to Lethbridge was successful -- Igniters win the District Humorous Speech contest for the second consecutive year! I've been checking with District 42 to figure out if that's ever been done before -- two different people from the same club winning in consecutive years. Going into the club contest, my goal was just to get past the club level. And I remember thinking it wasn't really fair to have to beat last year's district champion to attain that goal. But next year, somebody may have to beat two district champions.

You can take two lessons from my experience if you're thinking about competing next year. One: Even champions remain beatable. And two: If you can beat Igniters, you can beat everyone.

DB
Posted by Dave Brown at 4:33 PM No comments:

Igniters were out in force at the Division J contest Friday night, and brought home some new hardware in the Division Awards and the Humorous Speech Contest.
Igniters won Newsletter of the Year, for what, the third year in a row? Congratulations to the editor, Eden. She has really thrown down the gauntlet for whatever brave soul is supposed to follow that act.
And I won the division humorous speech contest. I really want to thank again everyone who helped me refine The Evilution of Rock over the last few weeks. Those little bits of paper you collect after a speech? They're actually full of insightful and useful advice! I never really sat down with them and studied them, for two reasons -- one, there haven't been many occasions on which I plan to 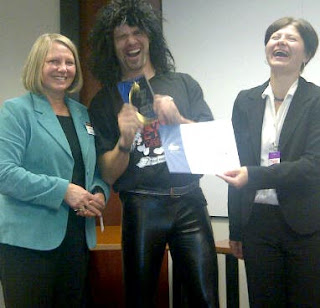 do a speech more than once. And two, by habit, I've always been kind of solitary in the creative process. I thought I didn't like collaborating. But last night was the sixth time through that speech for me. I've had the time and the motivation to really think about peoples' suggestions, and incorporate a lot of them. When I look at the difference between round one and six, I can see how much I've learned from everyone at the club. Thanks, everyone!
There is just one more round to go: the District 42 Conference, at the Coastal Hotel and Convention Centre, Lethbridge, Nov. 4 - 6. If there are options for car-pooling, let's discuss them after the meeting on Tuesday.

- Dave Brown
Posted by Dave Brown at 1:23 PM No comments:

Congratulations to Terri and Dave, winners of our club table topics and humorous speech contests. Come and cheer them on at the as they represent Igniters at the area contest, at the University of Calgary Student Council Chambers, MacEwan Student Centre. Thursday, Oct. 6, from 7 pm to 9 pm with registration at 6:30.
Posted by Dave Brown at 4:55 PM No comments:

It's been a whirlwind summer for Igniters, and we've had some accomplishments that should be recognized:

Posted by Dave Brown at 4:30 PM No comments:

What A Year for Igniters!


Big thumbs up - educational goals.  Igniters - your goals for next year?

At the first meeting of the year, January 4th, our guest speaker, Yvea Zaels facilitated a panel discussion. The topic of this discussion was how we as Toastmasters can support English as Second Language (ESL) members. Mona Cooley, Keith Lee and Maria Kandaurova were the 3 Igniters who participated in this panel. All three of them offered us practical tips how we can support ESL members. Review and practice their tips below:

· Explain the importance of having a mentor

· Explain the value of Toastmasters

· When evaluating keep STRESS in mind

Sensitive – to differences in culture

· Explain all meanings for the word of the day and use it in a sentence.

· Write and display the challenge word for all to see

Let’s work together to help all members feel supported and guided at Igniters.

How will you Succeed This Year? 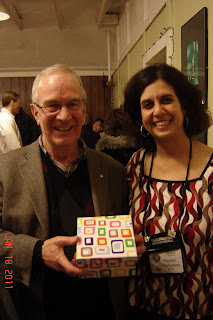 Nandini gave an inspiring speech "The Gift" and shared how you have a much better chance to succeed at your new years resolutions (goals) from the 9 most powerful words she learned from her friend Ray - By the End of the Year, I want to....
What are your goals?
Feel more confident speaking...be a more effective leader... communicate your ideas more clearly...

Garrett working on his advanced manual - Humorously Speaking gave an a funny and informative speech about investing. What is your dream?

Mona the Mentoring Coordinator gave a survey - all the members completed to keep building on the mentoring program. Mentors can help you get to your goals and dreams faster.

Posted by Marvin at 9:56 PM No comments: