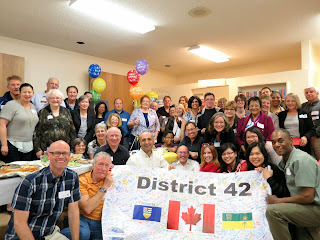 The organizing committee for Igniters organized a fantastic 10th anniversary celebration this past week. We had people from many different nearby clubs join us for the celebration. Including: Our sister club Miracles, Literally Speaking, SAIT Sayers, Smart Speakers, CTI Techtalkers, Speakmasters and To The Point.

On entry, our guests entered a door prize draw, enjoyed a slideshow, and well organized potluck. A silent auction was planned with many items up for bid, and attendees had an opportunity to bid. Of course there were a lot of chances for camaraderie and socializing.

Mona and Diane long-term Igniters members started the festivities, complete with boas and dancing.  The founding members of Igniters were introduced along with an explanation of some of the many places that the club has met over the years. Our toastmaster Marvin continued the fun by sharing past highlights. He organized this event with his High Performance Leadership team.

Division Governor Doris spoke about her experiences with Igniters and some of the more long term members of the club. She then presented a Competent Communicator ribbon to Stephen, who had completed his first ten speeches for our tenth anniversary. Stephen's CC also gave us a perfect triad with our club completing all ten of our goals for the year as a result. Congratulations Stephen!

Charter Member Anthony then took the lecturn and led us in a very motivational talk about the power of an idea when you have many people to help bring it to life. Anthony had us all participating and clapping as he married his speaking skills with his singing.

Our club president Nandini, then led us in a toast to some past and current members -- and a tribute for Jane a charter member who had recently passed away in March. Jane had written a special message to honor Igniters on their anniversary. Keith Past District Governor and past member had written a poignant message to honor members and his special memories of Igniters. Thanks to all who sent messages!

Bob who is the longest term member of Miracles, spoke next about the impact that Toastmasters has had on his life. Bob is now no longer afraid to speak in public and feels more confident as a result. Pat (past Igniter Member) took the lecturn next and shared stories about fond memories of joining Igniters, meeting members, and giving Table Topics.

Glen led us in a fun table topics session which featured several guests and past members. All of our speakers explained the value of toastmasters to them. We were all very inspired.

We finished the evening by lighting the candles on a big chocolate cake and gathering around for a great group photo. 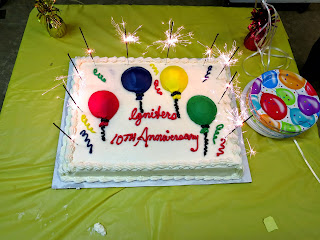 Congratulations to all who contributed to make this evening such a success!
Posted by Unknown at 7:00 PM No comments: